Peter Vere married Elizabeth and had 5 daughters including Mary & Isabella and lived in Grosvenor Place, London.

31 Mar 1805 - James Garnar, Gentleman, of Grantham died having left his estate  in Lincs, Leic and elsewhere to Elizabeth Vere (will dated1801).

7 Nov 1863 - Frederick & Isabella Foster, who had no children, made a will leaving the following  estate to Mary’s daughters (her nieces):

8 acres at Carlton on Trent, which were exchanged for land in Manthorpe.

½ of the estate in freehold farms (120 acres) in Deeping Fen from her late father Peter.

½ of her estate as co-heiress of James Vere.

14 Feb 1889 - Eleanor AC Dennistoun of Carlton Hall marries Count Francis Arthur Perucca Della Rochetta of Turin at St Martins in the Strand.  Conveyance dated 13 Feb mentions properties in Lincs, that she is co-heiress to her mother’s estate plus a share of the Foster estate from the 1863 agreement.  Trustees: James Craig of Carlton Hall, FJ Blake & CT Orford (both of South Sea House, Threadneedle St) 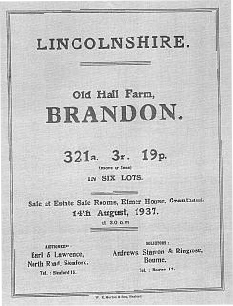