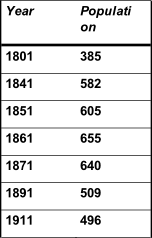 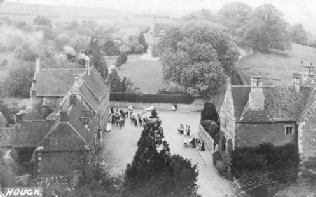 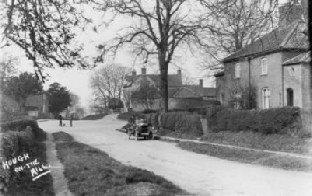 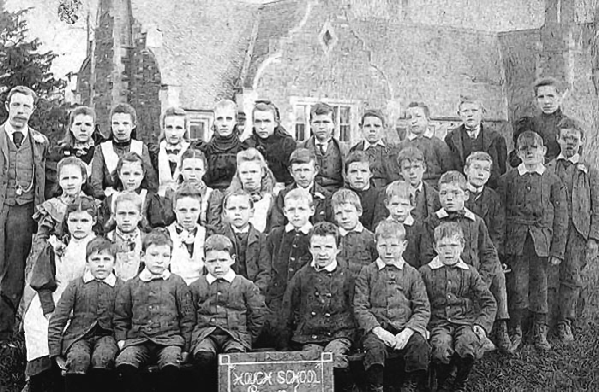 Hough on the Hill  (mostly from White's 1856 Trade Directory)

A village on a commanding eminence, 7 miles N. of Grantham, has in its parish 605 souls, and 3991 acres 3 roods 3 furlongs of land including the hamlets of Brandon (957A) 2 miles N and Gelston (863A) 1 miles S of Hough. The hamlets maintain their poor conjointly, and their roads separately. Brandon is between two branches of the River Brant and has a small chapel of ease. Gelston has an ancient cross and a Weslyan chapel. A small priory of Augustine Canons was founded at Hough, about 1164, subordinate to the Abbey of St Mary de Voto, at Cherburgh, in Normandy; but it was seized by Richard II, and granted first to Spittal in the Street and afterwards to the Carthusians of St. Ann's near Coventry. It was restored to Cherburgh in 1399, but was suppressed, with other alien priories in the Reign of  Henry V.  At the time of the dissolution by Henry VIII (1541) it was a cell to the priory of Montgrace in Yorkshire. In 1541 the estate was granted to Lord Russell.

(In 1856) Earl Brownlow  owns three-fourths of the parish and is Lord of the manor and impropriator.  The Welby, Hickson, Watson, and other families have estates here. The church (All Saints) is an ancient fabric, mostly in the decorated style, with a tower and five bells, and contains several monuments of the Payne family, formerly lords of the manor. It was  restored and reseated in 1845.  The vicarage in K.B. at £15 6s 6d and now at £99, is in the gift of the Lord Chancellor,and incumbency of the Rev. C. R. Andrews. Near the church is an artificial mound called Castle Hill; and here are several fine springs which give rise to the River Brant, and one of them is strongly impregnated with iron. Hough School was built by Earl Brownlow in 1845, and receives from him a yearly subscription of £10.

The poor parishioners have 17 acres of land, let for £20 per annum, which is distributed in coals and small sums of money. Loveden Hundred, or  Wapentake Court is held here in April, and Earl Brownlow is the lord paramount; and Messrs. White, Johnston, and White of Grantham are the stewards. 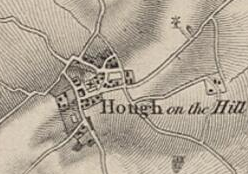