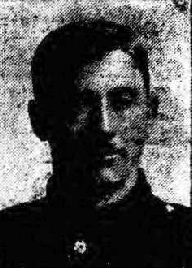 Thomas William Armstrong was born in Brandon in 1888.  Thereafter the family lived in Hough on the Hill (Chapmans Yard, then South End Lane) where his father Fred was a farm labourer.  In 1911 Tom was working as a railway navvy (perhaps in connection with the ironstone mines). He married Edith Parker in 1915.

He married Edith Parker in 1915.  He worked on the railway until being conscripted in Dec 1917, becoming a Sapper (Private) in 296th Railway Company, Royal Engineers.  He survived the war but was sent back to the continent at the start of Feb 1919.  Whilst there he contracted influenzea and pneumonia and died at No 1 Casualty Clearing Station at Mons, Belgium on 19th Feb 1919 (age 30) and is buried in Mons (Bergen) Communal Cemetery.

Thomas is listed on the Hough and Barkston war memorials.