‘Yew Tree Farms’ lodged a planning application for a large wind turbine between Green Lane and the A1 near Toll Bar, Marston.

The application was firmly rejected by the SKDC planning committee, but their decision was overturned by a single Government inspector and construction has now started.

The agent, Carter Jonas, refused to reveal the identify the applicant at the council meeting.  It has since been discovered that the landowner is a manager with the estate agency, who lives in Rutland, over 20 miles away.

The 74m (242ft) high turbine is capable of generating up to 800kW, but has been down-rated to 500kW to qualify for a higher subsidy. 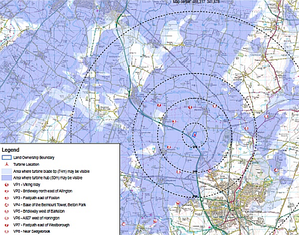 No financial / performance details have been released, except that this will be a 500kW turbine and hence designed to milk the ‘Feed In Tariff ’ subsidy scheme.  Why only 500kW from a huge structure? - See this article.

reVOLT calculate that for a 500kW turbine, if the owners use 50% themselves and sell 50% to the National Grid,  at current prices they would be given about £216,000 a year - £24,500 from the wholesale electricity price and £191,500 from the Feed In Tariff subsidy.  Subsidy farming is more lucrative than arable farming!

This assumes a 25% load factor, which means that the average output is only 125kW, compared to the 500kW ‘rated output’.  However, in the latest data, the load factor for onshore wind farms in the UK (including Scotland) was only 19%. 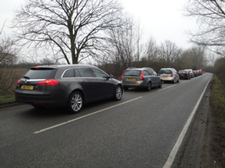 BLOT comments on SKDC failure to fight or contest the appeal. 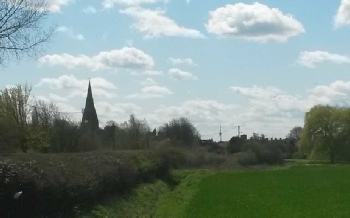 Heavy trucks brought in the concrete down the narrow lane.

The Green Lane turning not wide enough so trees and hedgerows cut back, steel sheets on the verge and white safety fence first damaged and then removed.

The approach to Marston now includes a rotating eyesore