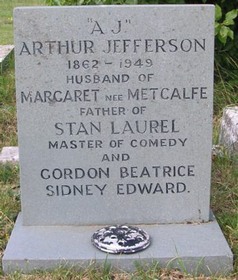 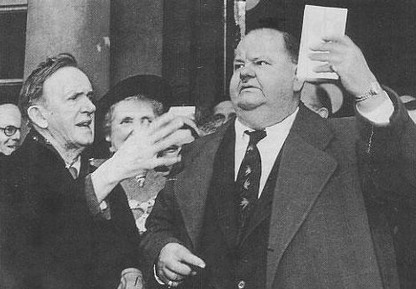 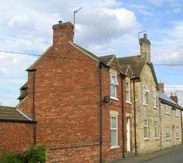 Whilst working at the Theatre Royal, Olga met local musician William Henry (Bill) Healey. He was born in 1896, the son of William H Healey, musician and music teacher, of 12 Welham Street, Grantham. Olga and Bill married in Grantham in 1937 and became licencees of The Plough Inn in West Street, Barkston (now a private house). In the latter years of World War 2 many of their customers were American airmen and soldiers from around Barkston Heath airfield.

In 1942 Arthur Jefferson (known as AJ), Stan and Olga's father, retired from the theatre and went to live with Olga and Bill Healey at the Plough. In Jan 1947 Stan & Ollie came to Britain on the first of their theatrical tours, but Olga, Bill and AJ  missed their arrival as they were snowed in at Barkston. However, in March 1947 Stan and Ollie travelled from London to Grantham (where they had lunch at the Red Lion) and then to Barkston. 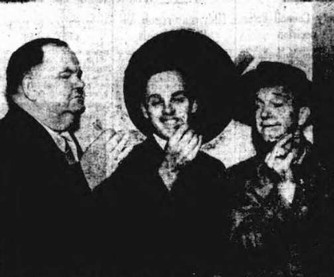 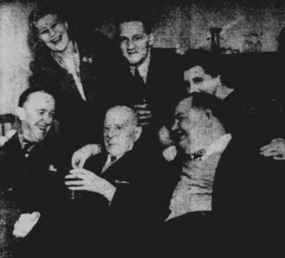 EIGHTY-SIX years-old  Arthur Jefferson waited patiently at the Plough inn at Barkston on Sunday.  He had put on his best blue suit, and was waiting to welcome his son - a worldwide screen personality - whom he had not seen in person for 13 years.

It was a touching moment as the son, and his equally renowned and corpulent partner walked in.  Stan Laurel and Oliver Hardy had arrived!

In this country to entertain the British public, Mr Jefferson`s son, Stan Laurel, had travelled from London with his wife Ida, and his partner, and they were accompanied by Mrs Beatrice Healey, his sister, and Mr. Bill Healey, brother-in-law, landlord of the Plough Inn.   Mr Jefferson last saw his comedian son 13 years ago, when he spent a year with him in America.  He was overcome with joy at Sunday`s reunion.

"I`ll race you up the street for a pound" quipped Stan.

Oliver Hardy was by no means out of the picture.  He enjoyed every minute of the celebration.

Before departing  for Barkston and the rendezvous with Mr Jefferson, Laurel and Hardy caused roars of laughter with their comical expressions, antics and wisecracks, and as they entered the waiting taxi a final "so long!" was accompanied by the famed wiggle of Hardy`s fingers.

Many villagers, principally the younger ones, were outside the Plough Inn when the party arrived, and they saw Laurel oblige with that amusing characteristic - finger-tips in his hair - which accompanies his screen performances.

Inside, the fun reached its peak, and at teatime Mrs. Healey`s homemade pastry was particularly popular with Oliver!

Before returning to London the same evening the comedians joined with "the gang" in the Plough bar and issued plenty of challenges at darts.

They evidently absorbed more of the instruction they received on the Red Lion board from Mr. W. Gillison, well known Grantham darts player, at lunch time than most of those present had appreciated!

It was obvious that Mr. and Mrs. Laurel and "Babe" as Hardy was nicknamed, had enjoyed their visit.

Arthur Jefferson died at Barkston in January 1949.  The funeral service took place in St Nicholas Church and he was buried at
Barkston Cemetery. The Laurel and Hardy appreciation society later raised money for a headstone on his grave.

In 1950, Olga and Bill left the Plough Inn to take over the Bull Inn, Bottesford, where Stan and Ollie visited them on several occasions. Laurel and Hardy also returned to Grantham February 1952, to open an Exhibition at the Guildhall.

In 1953 they spent Christmas Day with Olga and Bill at the Bull Inn, Bottesford.

Stan Laurel was born Arthur Stanley Jefferson. His younger sister, Beatrice Olga Jefferson, (known as Olga), who was an actress, moved to the Grantham area in the 1920s.

Stan visited Britain in 1927 and 1932.  In 1927 he stayed at the George Hotel, Grantham when he went to see Olga on stage at the Grantham Theatre Royal. He was mobbed in the streets by well-wishers and autograph hunters.